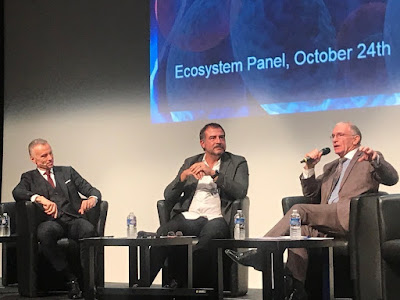 « Yannick BARDIE, If there was one thing to understand and master for the life sciences community to be prepared for the future, what would it be?”

The raising fact is that in the "New Economy" the added value of a company is catched, distributed and stored within this shared IS. In that perspective, the ecosystem is IS driven!

But what is an ecosystem of affairs ?

YB : an ecosystem: is a set of relations (vertical, horizontal and transverse; expresses or not formalized or not) between heterogeneous actors guided by the promotion of a common resource and an ideology which pulls the development of shared skills (ecosystematic skills). (Gueguen, Pellegrin and Torrès, on 2004)

It should be noted that 1990s see (for the pharmaceutical industry as for other sectors) the increase of the practices of impartition (we can assimilate the impartition to the outsourcing or to the subcontracting.), of relocation (Rivard and Aubert, on 2015). This tendancy has the effect of increasing the complexity of the ecosystem of affair and could have an impact on the degree of fiabilisation this one, knowing the fact that pharma industry shoud remain (or become) Highly Reliable Organization (HRO).

In this context, systemic safety of this extented organization requires the highest level of commitment of the collaborators as Kremer said in the so called "O-Ring Theory", theory that refers to Space Shuttle Challenger tragedy in 1986 (Kremer, M. (1993). The O-Ring Theory of Economic Development. The Quarterly Journal of Economics, 108(3), 551-575. Retrieved from http://www.jstor.org/stable/2118400).

Moreover, out boudaries skills are required (Soft Skills, Mad Skills) in order for each project team member to imagine the possible becoming of the system (the ecosystem) and prevent serious event, misconduct or fraud.  And furthermore to warranty the future of the organization by it confidence growth from clients and  shareholders.

One of these skills, concerns the ability to produce adequate behavior and decision in a context of complexity (due to ecosystem organizational matrix complexity) and uncertainty e.g. limited or sustantive rationality (Simon H.). This capability is called enaction!

Enaction is a way of designing the cognition which puts the accent on the way the bodies and the human minds get organized themselves in interaction with the environment. The theoretical approach to the cognition according to the notion of enaction, named enactivism, was proposed by Gregory Bateson, Humberto Maturana, Francisco Varela, Evan Thompson, and Eleanor Rosch. It is close to the situated cognition (situated action) and to the embodied cognition and is designed as an alternative in the cognitivisme, in the computationalism and in the dualism of Descartes.

To illustrate what enaction is, let's take the example of the handyman described by the famous Claude Lévi-Straus :

"The handyman is capable of executing a large number of task diversified; but, unlike the engineer, he does not subordinate each of them to the obtaining of raw materials and tools, conceived and got for the measure of his project: His instrumental universe is closed, and the rule of its stake is to arrange always with the "ways of the edge", that is a set all the time finished by tools and by materials, heterogeneous besides, because the composition of the set is not in touch with the project of the moment, nor moreover with any particular project, but is the contingent result of all the opportunities which appeared to renew or to enrich the stock, or to maintain him with the residues of constructions and previous destructions. Thus the set of the ways of the handyman is not definable by a project (what would suppose moreover, as at the engineer, the existence of so many instrumental ensembles as kinds of projects, at least in theory); he defines itself only by his instrumentality, in other words and to use the language of the handyman, because elements are collected or kept by virtue of the principle that "it can help". Thus such elements are half particularized: enough so that the handyman does not need the equipment and the knowledge of all the building trades but not enough so that every element is forced to a precise and determined employment. Every element represents a set of relations, at the same time concrete and virtual; they are operators, but usable with the aim of any operations within a type".

As a conclusion, I would say that if your company wanna become the master, the leader on his ecosystem, you need to be as creative as the handyman by enacting the ecosystem to take the lead on the IS, by pushing out the boudaries of it and then Shake! Shake! Shake! shake your clients! Shake your candidates! And shake the organization!

Thanks Kelly for confidence !